I really should have known better – I had managed to plan a visit to Blean woods during the first hot and sunny week of the year, and was looking forward to a gentle wander through the woodland, dappled sunlight playing across carpets of spring flowers. How I actually spent the morning was scrambling through bushes, old bracken and bramble and falling down the occasional hole. Still thoroughly enjoyed it though!

Paul had allowed me to gate crash one of his surveys, which turned out to be in an area of conifer plantation that was being restored to native woodland. Of course the thing about woodland restoration is that it takes time, and three years in, the area was thick with small birch trees, last year’s bracken and bramble, all growing fast now that the deep shade from the conifer trees has gone. It will be a while before the tree canopy lifts and the plants at ground level become more varied, but we found a fair bit of heather, which is an important part of the mixture of plants we hope to eventually see in this part of the woodland. 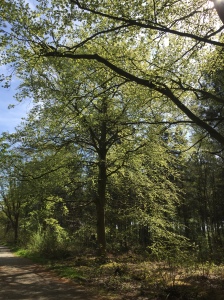 Arriving late, I had missed the chance for a lift from the car park to the section of Thornden Wood that Paul and his ecology group volunteers were heading for. Luckily, that meant a chance to walk along the track, flanked on either side with trees just erupting into that vibrant but ephemeral spring green. There were plenty of flowers along the woodland edge to satisfy my desire for spring colour; bluebells, wood anemones, bugle and the occasional lime green of a patch of wood spurge, almost fluorescent in the sunlight.

After a lovely walk down the track, resisting the temptation to explore the Wild Art trail, I found Paul and Mark (the Canterbury Area Warden) with Alex and Paul, two ecology group volunteers, forging through the undergrowth in pursuit of science.

Mark is experimenting with different management techniques, to see which is most effective in restoring the woodland. In the three areas we were surveying, one had been clear-felled (all the conifers removed)  and left to regenerate, another had also been clear-felled  and was being grazed from time to time. In the third, some conifers had been taken out to thin the canopy and let more light in. At this stage, there was a relatively small variety of species to be found, but it can still be quite tricky to identify young plants that are not in flower – fortunately Alex is an experienced botanist and able to help with any unfamiliar species. I can’t report any unusual species in the bits we surveyed, but the presence of native birch, willow, oak and hornbeam shows that the restoration to native woodland is clearly underway.

Edited 10th June 2016 because I got Paul’s name wrong. Unforgivable, because as well as being an ecology group volunteer he is a regular volunteer at Blean Woods and highly appreciated by the wardens. So sorry, Paul.