Clouds of gannets rise up from Bass Rock and fill the air with raucous cries, slicing effortlessly through the air on snow-white, black-dipped wings.

We bounced on top of the water beneath them, heads tipped back to gaze in awe at the graceful circus of gannets above our heads, holding on tight as the RIB (Rigid Inflateable Boat) met the waves with rather less grace.

Following The Wildlife Trusts’ advice on how to see gannets at their best, and a tip from Alan at Scottish Wildlife Trust, we were on a boat trip from North Berwick to Bass Rock, the biggest gannet colony in Europe.

Although they nest in dense colonies, gannets are highly territorial, each making it loudly clear to its neighbour that this is my patch. Gannets return to the same patch each year form long-term pairs, often for life. Bill fencing is a form of greeting behaviour that strengthens the bond between pairs.

The dagger-like bill of the northern gannet is used to catch fish. The gannet folds back its wings and plunges vertically from a height of up to 40 metres, disappearing under the water to capture its target.

The gannet colony has increased hugely since the lighthouse has been unmanned so that the island is now uninhabited. 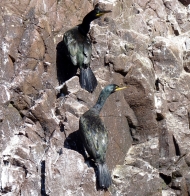 Shags breed on the nearby rocks. In the breeding season they develop an iridescent green sheen to their feathers and a spiky quiff, giving them a somewhat surprised look.

Gannets breed in tightly packed colonies, despite being highly territorial. 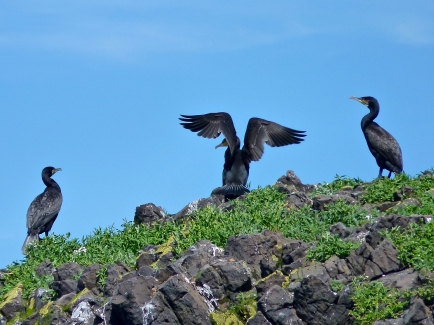 Cormorants on a nearby island. They don’t have as much oil on their feathers as other seabirds, and have to stretch them out to dry off from time to time.

This is the closest we’ve got to guillemot. They breed on a nearby island. 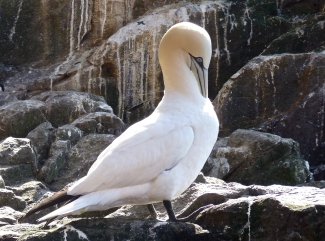 The snowy white plumage and creamy yellow head of the gannet is unmistakeable.

As a wildlife experience, this was one of the best, plus being fun going out in the boat. Can’t wait to do it again next time I’m in Scotland.