Our wildlife tour had taken us right up to page 107 of my Road Atlas of Britain, along the Kyle of Durness and into the awe-inspiring Smoo Cave on the north coast of Scotland. After slowly heading south over a few weeks, we suddenly jumped to page 2, the far south-west of Britain, exploring Cornwall. What better place to search for damsels and dragons?

In truth, spend any bright summer day near freshwater and you will soon be captivated by the jewel-bright flashes of damselflies and dragonflies as they dart across ponds and lakes, or skim along rivers and streams. You don’t even need to be near water to see some species, we often saw hawker dragonflies as we walked along woodland paths. But the days we saw whole rainbow selections of damsels and dragons were those we spent in the West Country and North Wales. I’d like to attribute this to some mythical link, but actually I suspect we were just lucky with the weather.

Making the most of the warm Cornish sunshine, and feeling optimistically energetic, we set out from Devoran on the coast to coast cycle trail. After just a couple of miles I was excited to come across a Cornwall Wildlife Trust reserve sign. Hastily abandoning my bike, I went to investigate Bissoe Valley nature reserve. Noticing my absence after a while (it’s not unusual for me to be lagging a bit behind, I stop to look at things and probably don’t make a very good cycling companion) Geoff cycled back to the reserve, picked up my bike and parked it properly, and came to see what the distraction was this time. Just as well he did, as he took some fantastic photographs. All the images in this post are his, please credit Geoff Woolley if you want to use any.

This common darter dragonfly was very obliging for the camera. 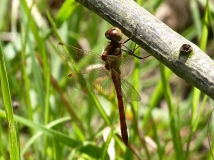 Metallic green emerald damselflies with sapphire eyes shimmered across the pools. It is easiest to photograph them when they are “in tandem”, the male clasping the female behind her head. This is part of the mating process, the female will curl her tail round (technically, her abdomen) to the male so that sperm can be transferred.

We saw several other species, but unless they stayed still for a few moments it was impossible to photograph them. You will just have to visit a reserve to see for yourself – it’s not too late, you should see them on any warm day over the next few weeks. Meanwhile, here are a few more from our travels.

2 thoughts on “Damsels and Dragons”