It is often said that most children are interested in nature, given the chance, but this interest gets lost somewhere along the way to adulthood. My daughters certainly became less indulgent as time went on, of my tendency to stop and look at every unusual plant and bug on family walks; teenagers, quite rightly, have different priorities. I sometimes wonder, now that they are leading city-based, millennial lives, how much connection with nature they have retained. Our busy lives rarely lend themselves to the kind of shared outdoor activities we used to enjoy, so when M came to join us for a weekend during our wildlife tour, I jumped at the chance of subjecting her to a bit of old-fashioned, seaside, family fun – rock-pooling.

Devon Wildlife Trust was running an “extreme rock-pool safari” from Wembury Marine Centre, near Plymouth. Extreme in the sense that it was on a particularly low spring tide, so the rocks would be uncovered further down the beach than usual, exposing marine wildlife that usually remains  beneath the waves. It was also raining and extremely slippery. Cat, our Devon Wildlife Trust guide,  vetoed M’s shoes, so I lent her my new walking boots, after extracting a promise that she wouldn’t go in above her ankles.

Cat led a group of all ages down the beach, scrambling over rocks to the waters edge. She explained the importance of putting everything back exactly where we had found it, including turning back any stones that we decided to search beneath. Some species spend all their lives in one small area and might not survive if randomly re-located.

Seasoned explorers then grabbed a tub and spread out to investigate the nearby pools whilst those of us who were less experienced gathered around whilst Cat pointed out some of the rock pool wildlife and explained how to identify it. Soon, there were cries of discovery, and we peered into the tubs to see the amazing creatures that people were bringing to Cat for identification.

At first, we had trouble finding anything, half-glimpsed shadowy shapes darted under seaweed and into crevices in the rocks as soon as we leant over pools. But we soon got the hang of turning over boulders to find all sorts of creatures clinging to the underside, or amongst the rocks and pebbles below.

Some fish, like these Cornish suckerfish, are well adapted to intertidal life and can survive out of water between tides in the damp conditions under rocks. 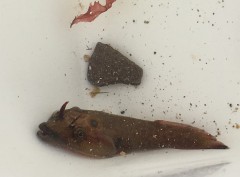 Cornish suckerfish, one of four types of clingfish, also known as the shore clingfish. 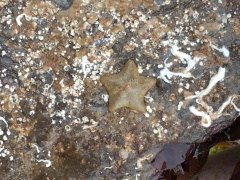 A cushion star, clinging to the underside of a rock. 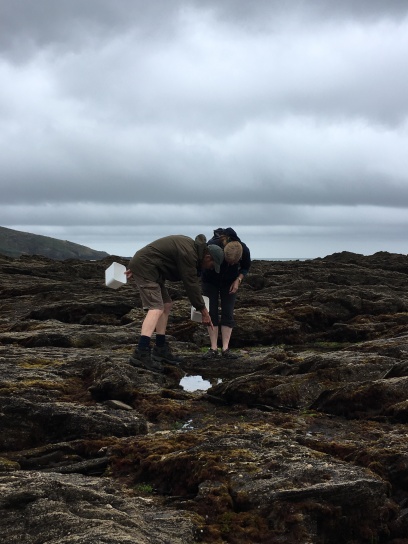 Me and Geoff, looking for rock pool treasure 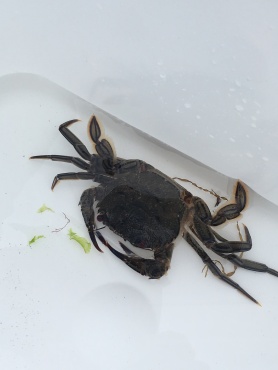 The stars of the day were the velvet swimming crabs, so-called because their  shells are covered with fine hairs. Cat explained why these two were locked together:

Many of the animals we found were tiny and marvellously delicate. One of my favourites is the blue-rayed limpet. You  find this at very low tides, clinging to the thick brown leathery fronds of kelp, a little translucent jewel with neon-blue dashed lines running along the shell.

We could happily have spent hours on the rocks, but the tide turned and eventually we had to head back up the beach. It was a brilliant way to spend an afternoon, and I learned that poking about in rock-pools never loses its charm.

Devon Wildlife Trust runs rock-pooling events at Wembury Marine Centre throughout the summer, many other Wildlife Trusts will run similar events, check their websites for details. You don’t have to wait for next summer, though. At Kent Wildlife Trust, we also have a year-round programme of Shore-search events, where you can come and help us identify and record the marine wildlife around Kent’s coast.